We had so many spectacular submissions for each of these competitions, and are pleased to announce the winners! 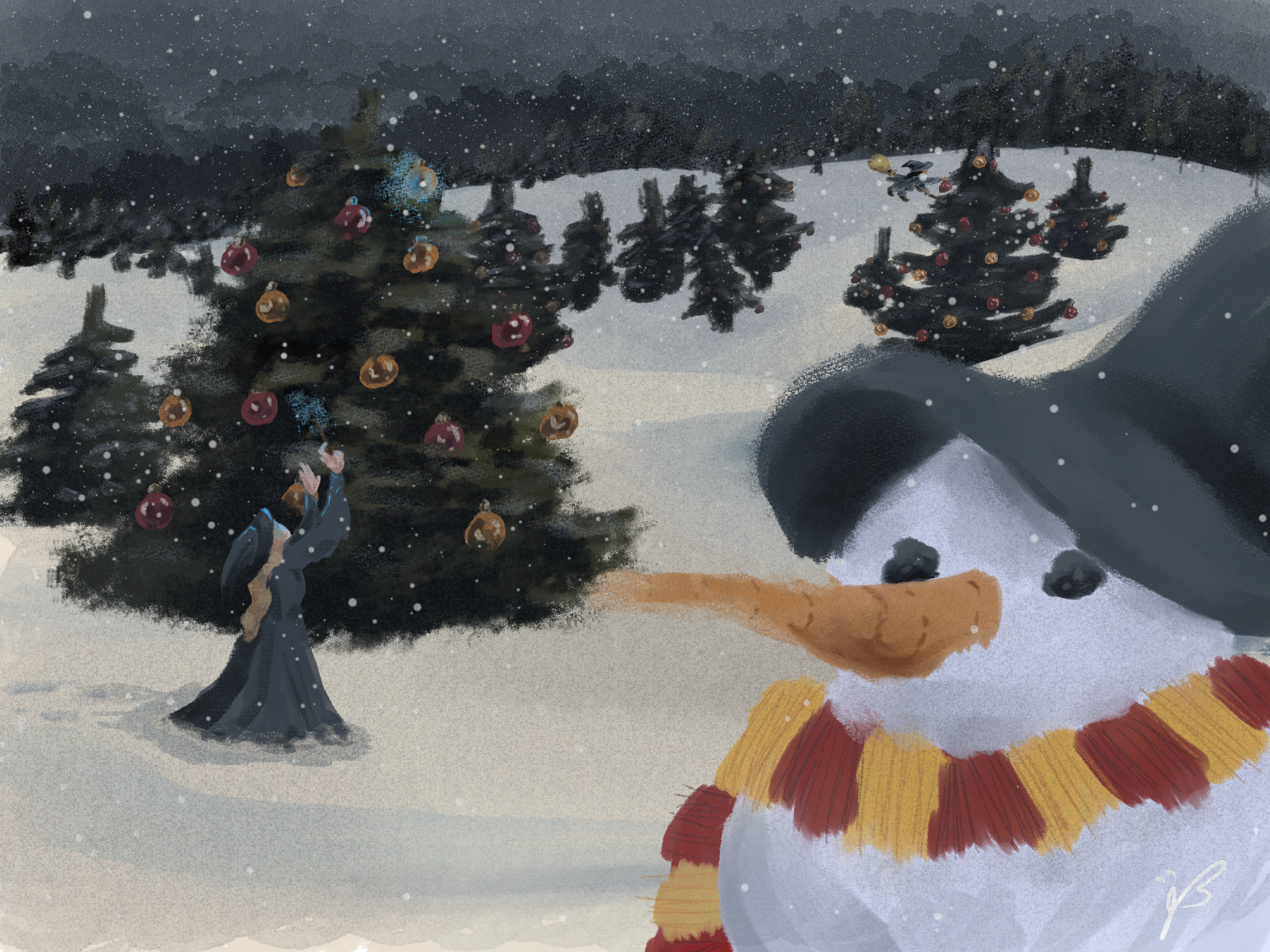 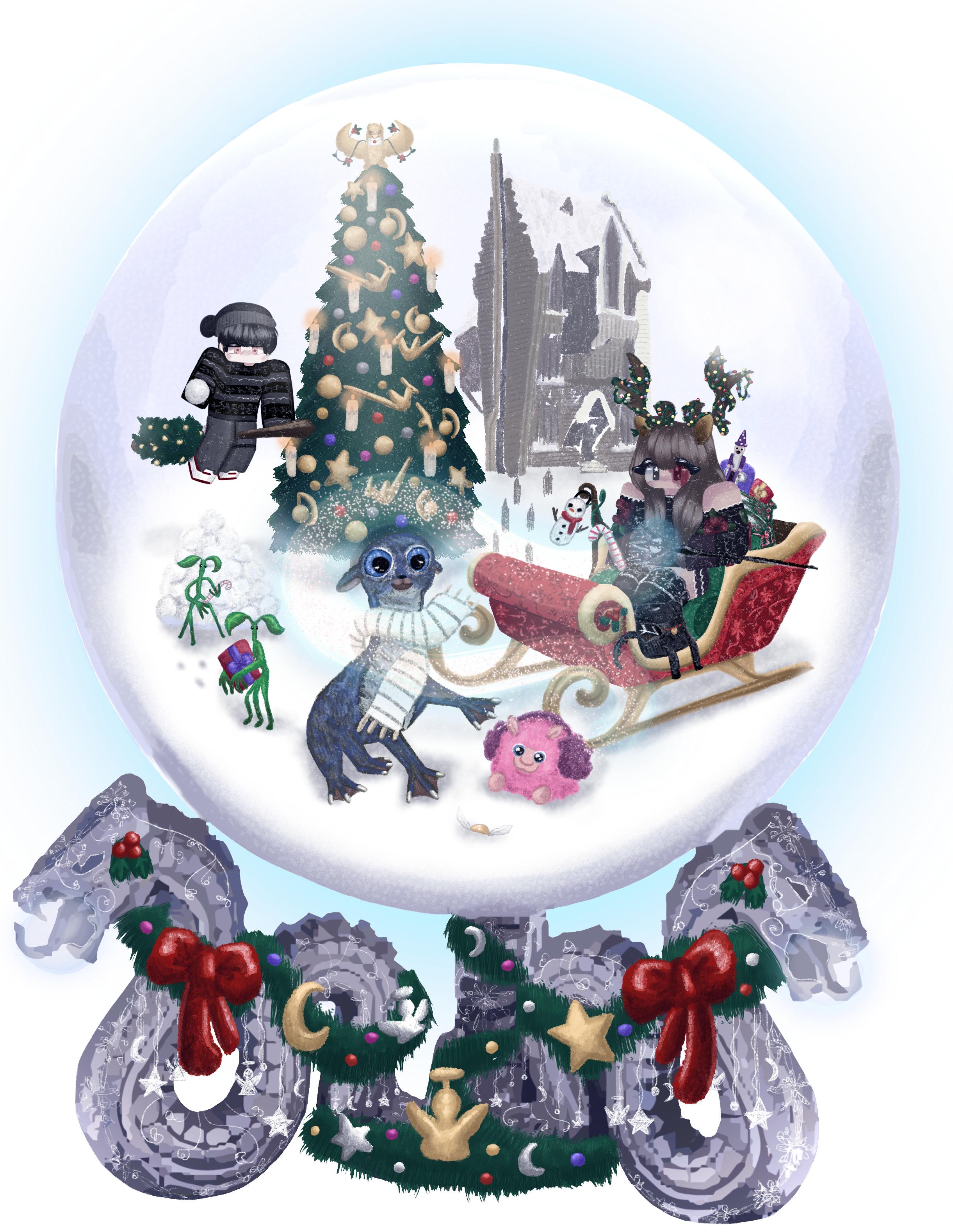 Will I be home this Winter?
If my mind is in a cloud
Dreaming of spending the holidays
In a place where I’m allowed

I’ll be allowed in my home
But what about my friends?
My friends who believe that
Women should only love men

But for now I’ll stay here
I’ve got plenty of time to go
I’m staying home this Winter
Even though we won’t have snow
There is a painting on the third floor of Hogsworth. It is still, one of the few in the castle that remains untouched by magic. Or so it seemed.
Jay knew this painting well. The painting depicted a deceptively simple portrait of a Christmas Market. But Jay knew better. Each year, when Christmas approached and she was left lonely in the castle during break, she would sit in the hall and stare into a world she wished she could enter, a desire she thought would never be fulfilled.
Until one fateful evening.
‘Rumple!’ Jay shouted through the halls. The startled screech of her runaway owl was all she heard in return.
She turned a familiar corner and saw the painting in the distance. A snowy white owl was flying straight toward it.
‘Rumple, come back!’ she shouted, just as her owl gave a final push of its wings, and—
Disappeared into the painting.
Startled, she came to the canvas and pressed a hand to it. It rippled, and her hand disappeared inside.
She shut her eyes tight, held her breath, and stepped into the painting.
She opened her eyes to find herself in that very scene she had studied so many nights alone. When she looked beind her, there was a red-brick wall and a mural of Hogworth. There was noise; the quiet crinkle of boots on snow, the soft touch of snowflakes on the ground below, mothers and fathers and children all about…
The cry of an owl above turned her back to the street ahead. She saw Rumple circling in the distance, calmed at last, and Jay started down the street.
Stalls lined the sides. There were countless crafts, and all about were decorations of Christmas.
She stopped beneath her owl above and held out her arm. Rumple descended with a ruffle of her feathers and blinked with wide eyes at Jay.
‘Time to go home,’ she murmured. She went back through the street, gaze lingering sadly on the stalls, and her eye caught an ornament booth. She stopped and stared.
The shopkeeper noticed, said, ‘Would you like one?’
‘I have no money.’
‘Ah, but it’s Christmas. Here, take this one,’ the shopkeeper said, lifting up a small glass polar bear threaded through with a red ribbon. Jay took it, hid it in her robes.
She came to the mural on the brick and looked back at the street. It was so peaceful, so wonderful… sad to leave, she walked through the painting and into Hogsworth again.
She looked behind her and pressed a hand to the painting. It was solid beneath her cold fingers.
She sighed and returned to her dorms quietly, letting Rumple fly to the Owlery. When Jay woke in the morning, she wondered if it had been a dream. But when she reached into her robes, her fingers found a glass ornament, and she smiled.
Magic was a beautiful thing.
“Aren’t you excited?? ” Nikki bounced around the entrance of the Great Hall. “Your first Winter Waltz!”
Enzo smiled in his white suit with a red tie. “Very excited,” He looked at Nikki’s beautiful flowing pink silk dress, “You look great!”
“You too!! I wonder who picked that suit out for you…?”
Enzo rolled his eyes and laughed, “You think they’ll dance with me?” The smile on Enzo’s face faltered.
“I know they will. Just go for it! Come on, let’s go inside!!”
As the pair was entering, their friend Ethan interrupted the two, “Hey Enzo!! You’re actually at the Winter Waltz this year?? “Dude, that's crazy!”
“Yessir” Enzo nodded. “Nikki convinced me.”
“Got a date??” Ethan nudged.
“Nope, not yet.”
“Yet? So you plan on asking someone”
Enzo blushed, “Uhh, I’m not sure.”
Ethan raised his eyebrows. “Who’s the lucky lady?”
“There is no lucky lady. I’m not asking anyone.”
“C’mon Enzo!! Who’s the girl?”
“There is no girl.”
“Don’t be embarrassed, just-”
Nikki then interrupted, “Hey Enzo, come with me!” Nikki grabbed Enzo’s suit and together they entered the Great Hall.
“Thanks for that.” Enzo hugged Nikki.

The students all danced, ate food, and just had a good time at the Waltz. The pair didn’t do much besides sit down and talk, occasionally getting food.
Then Ethan showed up. “Enzo!! You got a date yet?”
“No, I don't.”
“Well the ball’s almost over!! Hurry up!!”
A girl then put her hand on Ethan’s shoulder. “Come on Ethan!! Let’s go dance!!”
“Coming!!” Ethan looked at Enzo. “There are plenty of girls without a date, just ask any of them.” He said before leaving and heading for the dance floor.
Enzo sighed.
Nikki put her hand on his shoulder, “Don’t listen to him. He’s being stupid. But he was right about one thing. The ball is almost over. It’s now or never.”
Enzo looked up to see a red figure standing on the opposite side of the Great Hall.
“You’re right. I’m gonna do it.”
Nikki looked at the direction Enzo was facing and smiled. “Go for it!! I know you can do it!!”
The pair hugged and Enzo made his way across the Great Hall. He approached a boy wearing a completely red suit, with a white tie.
He smiled when he saw Enzo walking towards him, “Hey Enzo!! How are you?”
“Hey Mason, I’m good.” Enzo caught his breath and he turned around to look at Nikki. She gave him a thumbs up.
Enzo nodded and turned back around. He took another deep breath and said, “Mason, do you think, that maybe….we could have, one dance together…?”
The smile on Mason’s face began to fade, “You want to dance? With me?”
Enzo sighed, “Yes….”
The smile then returned to his face and it was bigger than ever.
“I would love to,” He grabbed Enzo’s hand and the two boys smiled as they made their way to the dance floor.
Congratulations to the winners! For the 1st Place winners, to claim your prize, create an in-game ticket by using the command /t create. You can also do so by messaging Kala (kala#5755) or Sunnya (sunnya#6761) on Discord. We loved seeing each and every one of the submissions for this competition, so thank you to all of those who participated! We've also given all of those who participated 200 Potter Points as a thank you for entering.